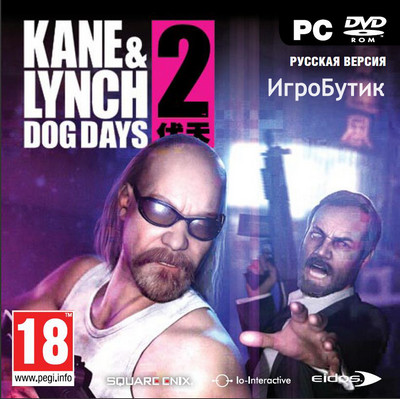 Uploaded: 19.08.2010
Content: text 29 symbols
Loyalty discount! If the total amount of your purchases from the seller ИгроБутик more than:
If you want to know your discount rate, please provide your email:

ИгроБутик information about the seller and his items
offlineAsk a question

********
GIFT TO THIS GAME!
We give our customers as a nice gift for a purchase - a game (activation in Steam). What you need to get a gift:
1. Buy a game that takes part in the action (in the title certainly indicated "GIFTS +");
2. Write a positive review, which must be present, the phrase "I want a gift from IgroButik";
3. Subscribe gifts made within 1-3 days after leaving reviews on your email, you are left to get the key purchase.
********

The game is entirely in Russian with optional English and Polish version !!!

The most charismatic and brutal pair of characters is back - and this time even worse than before! Psycho-recidivist James Lynch lurking in Shanghai, content humble apprentice position at a local crime boss. Boss instructed Lynch crank the sale of large quantities of arms, and James remembered his old comrade-in-arms - a mercenary retired Adam "Cain" Marcus. IgroButik. The deal Lynch is quite as planned, and the insane duo has just 48 hours to correct the mistakes, punish those responsible, and to stay alive in the streets of Shanghai to arrange a grand performance in the spirit of the legendary "Fight" Michael Mann.

48-hour coverage of the life of the most uncompromising pair of heroes. Adam Marcus nicknamed Cain and James Lynch once again teamed up to turn the arms deal. The deal fell through and now associates have two days to deal with the situation and punish all those responsible. Shop IgroButik. Criminal drama involving the Shanghai police and local organized crime groups in the spirit of the legendary "Fight" Michael Mann made in accordance with the canons of the era of Web 2.0.

* The unique graphic style reminiscent of the era of unprofessional survey of Web 2.0.
* Complete the realism of what is happening in the game makes an exciting report about the operation to capture a dangerous gang offenders - with you in the lead role!
* James Lynch as the protagonist: Try yourself in the role of a psychopath, not stopping at nothing!
* Updated mechanics shootings, forcing literally fight with the team actions dragged on artificial intelligence, enriched with new tricks and features, including a system of injury.
* Your hero, even after receiving a bullet may shoot and crawl to the nearest shelter, and use the unwary enemy as "human shields."
* Updated multiplayer modes, known and loved by the players on the game Kane & Lynch: Dead Men.

To begin playing the "" Kane and Lynch 2: Dog Days "is necessary:
1. You need to download and install Steam-client http://steampowered.com/download/SteamInstall.msi (if not already installed)
2. Register your new account on Steam or go to an existing one.
3. Go to the "My Games" and select "Activate via Steam ...", read and agree to the Steam Subscriber Agreement and enter the key received immediately after the payment.
4. After activating the game appear in the list of games and you can download it from Steam. The process of downloading takes about 45 minutes depending on the existing Internet channel.

Detailed instructions with pictures on how to activate a purchased key for Steam - http://www.igrobutik.com/activation_key_steam.html

After activation serial key in the steam, the key becomes not valid, ie, re-use it is no longer possible, so be sure to remember all the details of your account! Without them, you will not be able to gain access to active games in the future.

We are pleased to offer:

Please leave positive feedback - this is very important for our future work.

We are always ready to help you and happy to answer all your questions (on ICQ, e-mail).